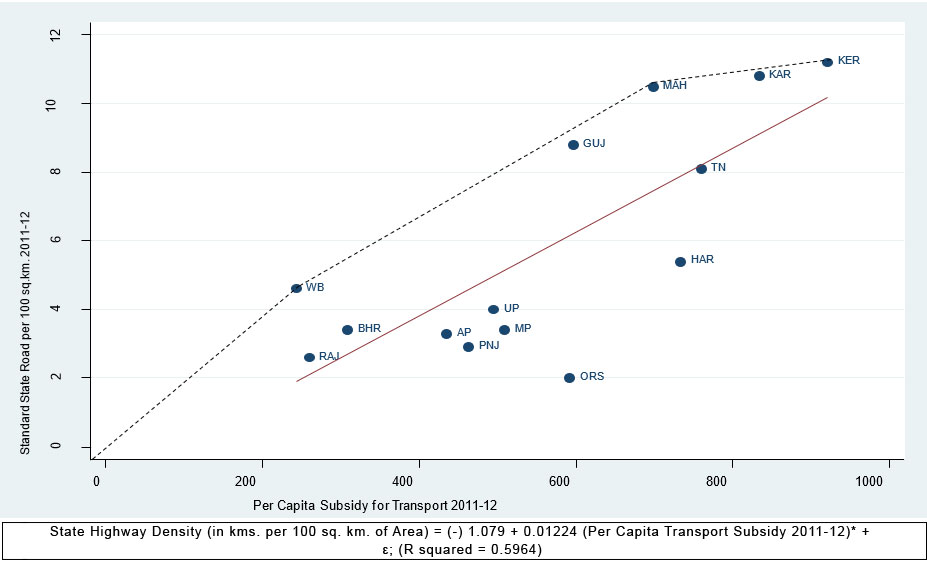 Notes:
(i) * Significant at 1% level;
(ii) State codes: AP-Andhra Pradesh (Telangana); BHR-Bihar (includes Jharkhand); GUJ-Gujarat; HAR-Haryana; KAR-Karnataka; KER-Kerala; MP-Madhya Pradesh (includes Chhattisgarh); MAH-Maharashtra; ORS-Orissa; PNJ-Punjab; RAJ-Rajasthan; TN-Tamil Nadu; UP-Uttar Pradesh (includes Uttarakhand); WB-West Bengal
(iii) State highway density is measured in terms of kms per 100 sq. km of area.
Among social services, there is a strong positive relationship between education subsidies and different indicators of educational outcomes. The relationship between per-capita education subsidy and literacy rate (2011-12), and the government’s education development index (Education Development Index, 2011-12)1 are presented in Figures 2a and 2b, respectively. The relationship of per-capita education subsidy with both indicators is positive and statistically significant at the 1% level. A similar strong positive relationship is evident between education subsidy and learning indicators for reading and mathematics, both again significant at the 1% level, as can be seen in Figure 3a and 3b2. The indicators selected are measures of the reading and mathematics skills of students of grade 1 and 2.
Figure 2a. Education service delivery (literacy rate) and per-capita education subsidy, 2011-12 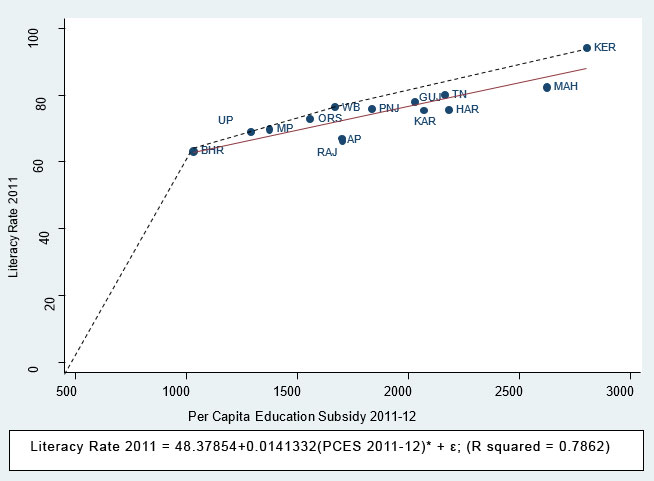 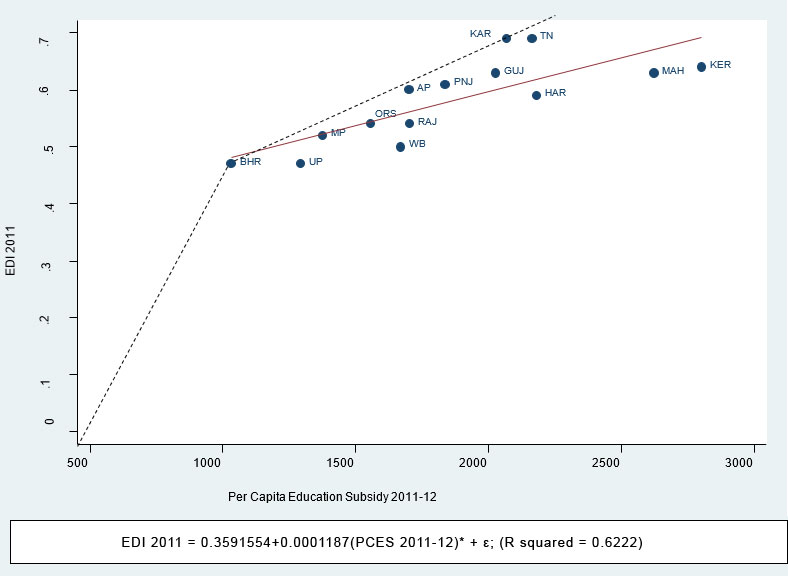 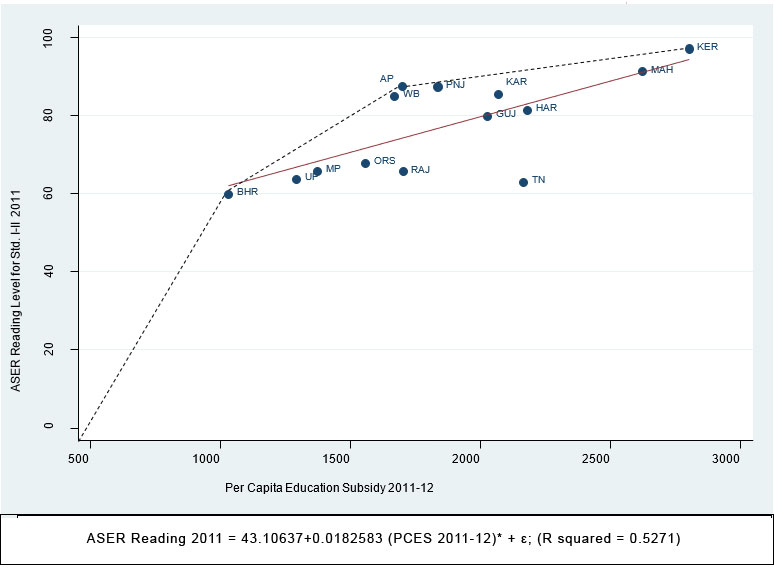 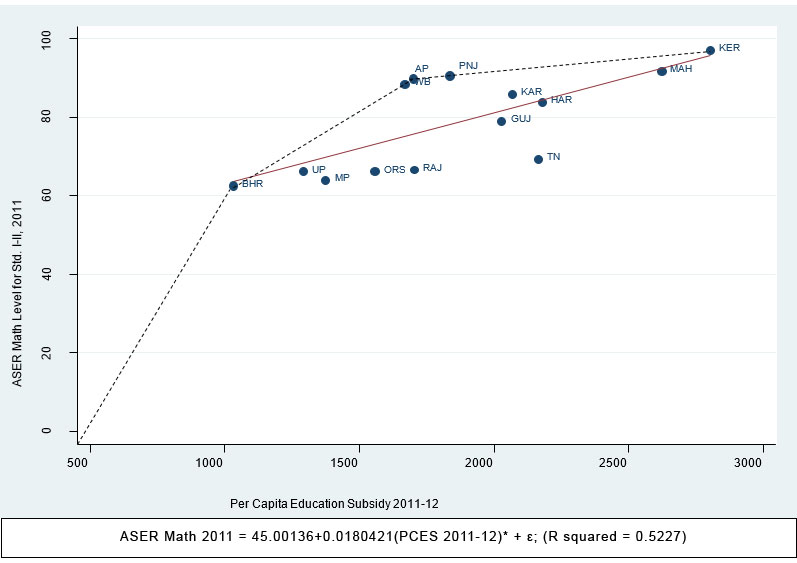 Notes:
(i)* Significant at 1% level.
(ii) State codes: same as Figure 1.
The relationships between per-capita subsidy for consumption of health services and health outcome indicators, namely, the Infant Mortality Rate (IMR) and life expectancy are presented in Figures 4a and 4b respectively. The two indicators have an inverse and a positive correlation with per capita healthcare subsidy, both again significant at 1% level.
Figure 4a. Health service delivery (infant mortality rate) and per-capita health subsidy, 2011-12 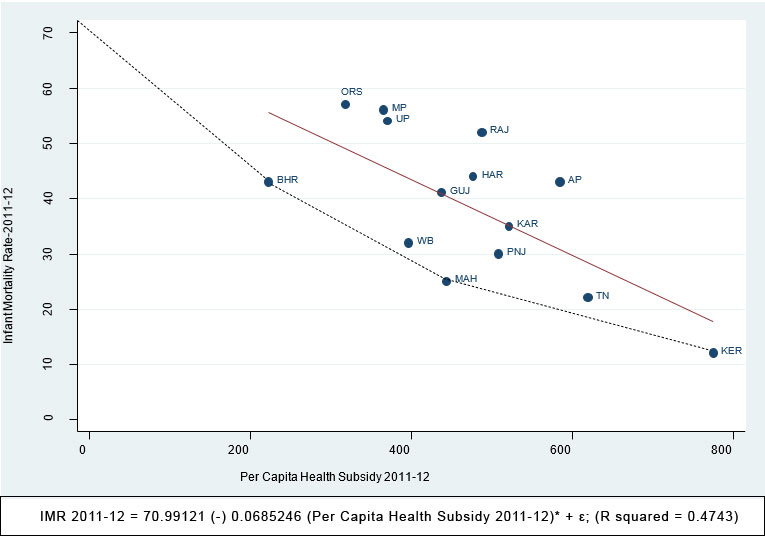 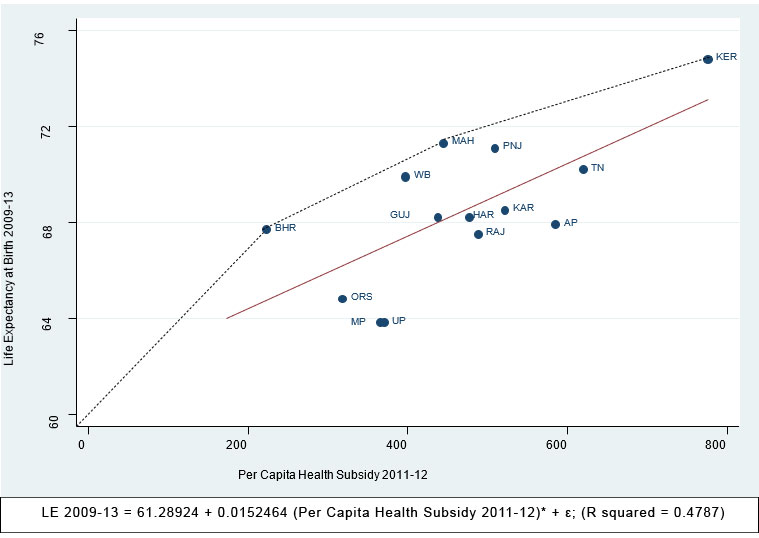 1.  Education Development Index (EDI), 2011-12 is a composite educational development index for all schools and managements, based on District Information System for Education (DISE) data, collected from NUEPA (2013), page 43.

2.  The learning indicators are from various rounds of the Annual Survey of Education (Rural) Report (ASER).

3.  The concept of a subsidy efficiency frontier is an adaptation of the states’ expenditure efficiency measure developed by Mohanty and Bhanumurthy (2018).

4.  Food support through extra free rations has, in fact, been stepped up very significantly, though many citizens without ration cards have not been able to access the free rations. By comparison, steps to provide income support have been very limited so far.

6.  PM-KISAN is a central-sector scheme that provides an income support of Rs. 6,000 per year to all farmer families across the country in three equal installments of Rs. 2,000 each after every four months.

7.  MNREGA guarantees 100 days of wage-employment in a year to a rural household whose adult members are willing to do unskilled manual work at state-level statutory minimum wages.

Sudipto Mundle is Distinguished Fellow, NCAER, New Delhi and Satadru Sikdar is Assistant Professor, NIPFP, New Delhi.
The views expressed in the post are those of the authors only. No responsibility for them should be attributed to NIPFP.
This post was published in 'Ideas for India' on September 4, 2020.
blog comments powered by Disqus