The primary input that goes into an infrastructure project is money. In the case of the Delhi Metro, cost estimates run to Rs.5.52 Billion per km for the underground stretches and Rs.2 Billion per km for the over-ground stretches. The construction cost does not include the cost of land, which the government provides at a subsidised rate.
Turning to the revenues, the arithmetic is clear. The revenue of Delhi Metro comes from the price per ride and the number of rides. To fix intuition, suppose we spend Rs.100 on an asset. Suppose the capital requires annual payments of Rs.10 per year. The infrastructure asset has to then generate at least Rs.10 of cash per year, after paying for the (small) running costs. This cash can come about in many ways, e.g. sell 1 ticket at Rs.10 or sell 10 tickets at Rs.1, and so on.
The cost of capital in India is relatively high, given the presence of high macro/financial risk and a closed capital account. The annual cost of servicing the debt and equity capital, that goes into such projects, will be higher than is the case elsewhere in the world. The costs of building an urban metro system in India are similar to those seen elsewhere in the world. But the same infrastructure asset has to generate a higher revenue stream in India given a higher cost of capital. This means that the user charge or the intensity of use, or both, have to be higher in India.
Hence, to think about the viability of the Delhi Metro, we have to examine the extent to which it beats global benchmarks in user charges or intensity of use or both.
User Charges
User Charges for Metro 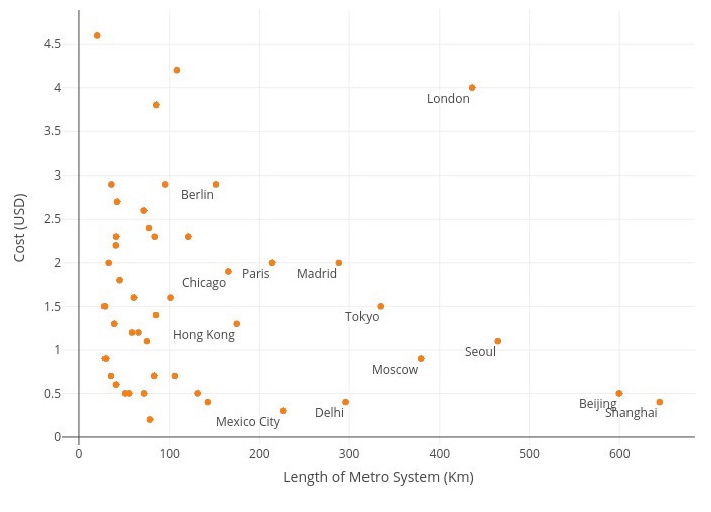 As the graph above shows, Delhi Metro has one of the lowest user charges in the world, when compared User Charges for Metro with other large metro systems. So we're not getting through on this one.
Intensity of use
We could just look at the number of rides in the Delhi Metro. Matters become a little more complicated for international comparisons, as the number of rides varies (slightly) with the length of the metro system. Bigger metro systems get somewhat more rides. To compare apples with apples, we look at how Delhi Metro should have fared in the context of these relationships, as observed worldwide.
Rides per Km 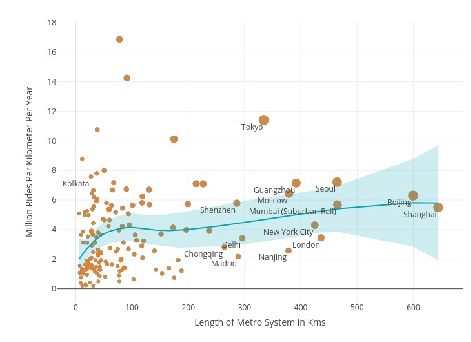 As the graph above shows, on this metric also, the Delhi Metro fares poorly. Delhi Metro is out of line when compared with the relationship seen worldwide. In this graph, the size of the bubble is proportional to total annual rides. Mumbai's ancient train system is faring well in translating kilometres of track into rides. The old Kolkata Metro also does a pretty good job in generating rides per km of track. But Delhi is not.
Thus there is a financial problem
The cost of a metro system in many big cities of the world is similar. The dominant element of this cost is the cost of capital. This is a more significant barrier in India, as the cost of capital is higher in India when compared with most large countries. To make ends meet, a metro system has to achieve the required cash flow by having an adequate user charge multiplied by the number of rides. In Delhi Metro, we are faring poorly on both counts: We don't have an adequate user charge, and we don't have the required number of rides.
Rides and User Charges 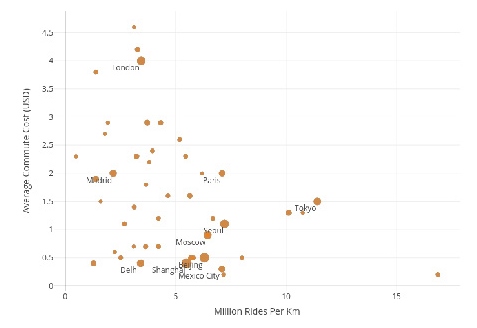 As the graph above shows, Delhi fares poorly on both Rides per Km per Year and the average price charged for a commute. The size of the bubble represents the size of the metro system.

Suppose we treat Shanghai as a benchmark. Their charge is similar to that in Delhi, but they get 5.49 million rides per km of track against Delhi's 3.41. There is a gap of about 60%.
How could this gap be closed by holding prices intact? Last year, Delhi's metro system was 296 km long. Delhi would need to get 615.68 million more rides per year without increasing track length, to catch up with Shanghai. That is a 60% rise from Delhi's 2017 ridership of 1007.9 million rides.
Conversely, to obtain the same revenue per km of track, Delhi needs to charge 60% more per ticket. This seems far more feasible.
As Delhi adds more lines next year, the denominator will grow. This will translate into a bigger challenge in terms of obtaining the requisite number of rides.
Positive externalities
We could argue that Delhi Metro is all about positive externalities and that we should not be so worried about the lack of revenues. We can then use other means like taxes to pay for the system. In this vision, the essence of urban infrastructure lies in promoting dense interactions between residents. This is measured by counting the rides per capita. A metro system is inducing large positive externalities if it achieves high values of rides per capita per year.
Rides per capita 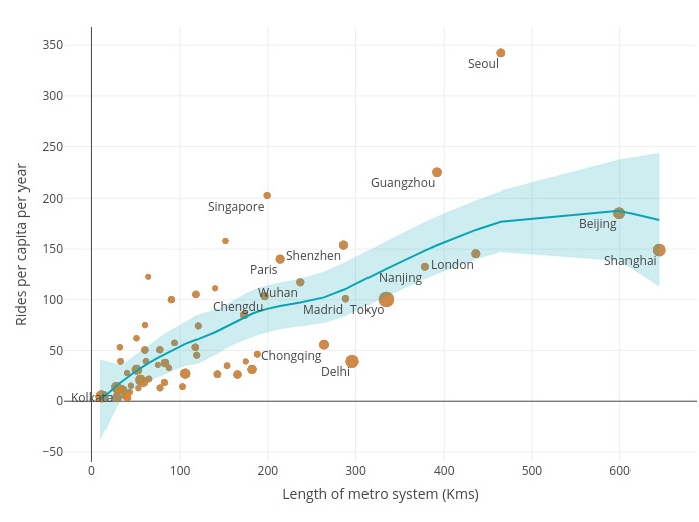 As the evidence above shows, Delhi Metro fares poorly on the rides per capita per year. Delhi is not a small metro system. It now ranks on amongst the top ten metro systems. As the graph shows, in such large systems, the rides per capita should be higher, as the metro network covers the city better.
For an example, Delhi and Madrid are both at about 200 kilometres of line. But in Delhi, there are 25 rides per person per year, while Madrid is at about 100. We are about 4 times worse than we ought to be.
Conclusions
To justify infrastructure assets such as Delhi Metro, we in India have to find exceptionally large user charges, given the difficulties of macro/finance policy which impose an elevated cost of capital. Or, to the extent that the direct revenues are inadequate, we have to justify the expenditure based on an externalities argument.
Delhi Metro is faring poorly on all three fronts. The cost per ride is low, i.e. the user charge is inadequate. The number of rides per year is low. The intensity of usage is low. We have a problem.
We conjecture that part of the problem may lie not in Delhi Metro but in Delhi's urban planning. Delhi is a vertically challenged city, with severe restrictions on the number of floors a person can build. This FSI restriction creates large areas of low-density housing. For example, the IIT Delhi Metro Station is bound by IIT Delhi on one side and the Green Belt on the other. IIT Delhi has a student population of less than 8,000 and the Green Belt is entirely uninhabited for a few kilometres. In effect, the IIT Metro Station does not have a catchment area of an adequate number of potential customers.
The authors would like to thank Vimal Balasubramaniam, Devendra Damle, Ashim Kapoor, and Shalini Mittal for valuable contributions.

The authors are Legal Consultant and Professor at the National Institute of Public Finance and Policy.

The views expressed in the post are those of the author only. No responsibility for them should be attributed to NIPFP.